The best of our winter harvest, saved from frosts but ravaged by slug and snail. #breadboard #breadboardmuseum #allotment #wintergreens #snailaday
Celebrating George Wing and Bramhall of Sheffield and their massive contribution to the history of BBs with the biggest pair of BBs you will ever see! Display at Sheffield Local Studies Library. Thanks to Maggie and Heather, Sue and Nick! For one month only. #breadboard
Our latest lovely donation, a fruitily carved oak ‘Fruit’ dish from Mrs Salt, wife of Raymond, who was a carver at Bramhall Co. Sheffield. A sister dish went to Kelham Island. Given at a joint talk at KI with Nick Duggan, that November day before the Don flooded. Fruit from a Putney charity shop (couldn’t leave it languishing). KI totally worth a visit - over 200 bread knives were on display for the 20+ intrepid visitors who braved the storms. #breadboards #breadboard
Brambly Hedge. I used to love the cosy clutter. Must have inspired the bb museum unconsciously! Note Breadboard and cottage loaf - our trade mark. #breadboard #cottageloaf #bramblyhedge #vintagebreadboard
Nancy sings the Blessing of the Bread over our Jewish bb. Owner of the Umbrella Cover Museum - quirky, right? - in Maine, she wants to start a Niche Museums Association! #breadboard #challahbread
ALERT! Amazon cannot deliver to the US by Christmas. Please contact the publisher, Prospect Books, and order directly. Catheryn will get them to you in time! Postage included. #vintagebreadboards #breadboard 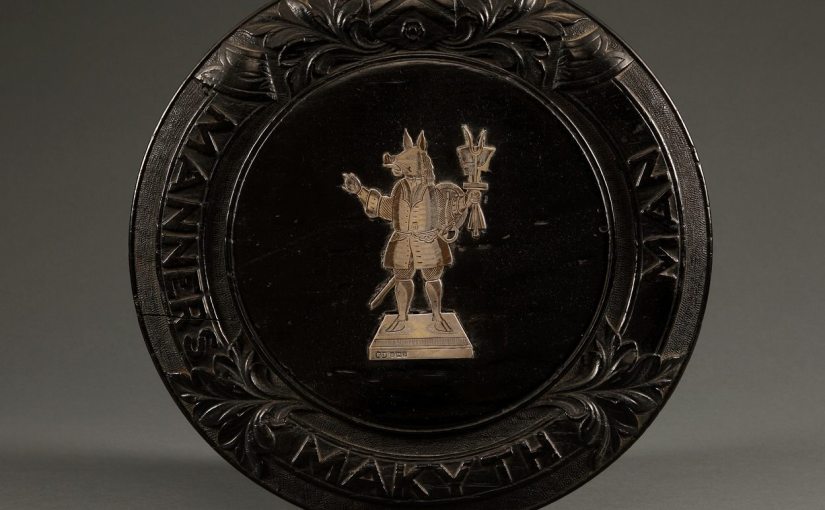 A lacquered board with “Manners makyth man”, the motto of New College Oxford (1379), Winchester College (1382) and William of Wykeham (1324-1404), Bishop of Winchester (1366-1404), who founded them. The border is topped by the personal coat of arms of William of Wykeham amid lush acanthus leaves, which both establishments share.

Winchester College describes it thus: ‘argent two chevrons sable between three roses gules seeded or, barbed vert.’ The central silver inlay depicts a hircocervus, a mythical beast with Greek origins, which John Hoskins adapted to depict the many virtues of a perfect servant in 1579. It was located outside the kitchens of Winchester College. A verse accompanied the wall-painting translated from the Latin:

A trusty servant’s picture would you see,
This figure well survey, who’ever you be.
The porker’s snout not nice in diet shows;
The padlock shut, no secret he’ll disclose;
Patient, to angry lords the ass gives ear;
Swiftness on errand, the stag’s feet declare;
Laden his left hand, apt to labour saith;
The coat his neatness; the open hand his faith;
Girt with his sword, his shield upon his arm,
Himself and master he’ll protect from harm.
(Howard Staunton, The Great Schools of England (Shrahan, 1869)